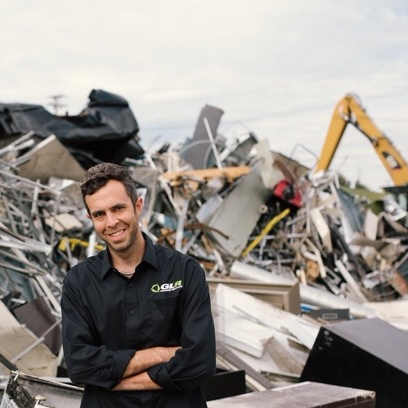 “We are the last stop before a vehicle is melted and recycled,” says the owner of GLR Advanced Recycling, describing how junked vehicles provide materials to make new ones. “We end the life of old cars but ultimately you are giving life to new ones.”

His Michigan-based company tries to churn and turn as efficiently as possible, just as vehicle manufacturers at the beginning of the automotive circle of life strive to do.

“With an assembly line, one worker puts this part on, another worker puts that part on and so on,” he says. “We’re the inverse of that. We have a system and each person knows their responsibilities. It’s seamless.”

He owns five metro Detroit metal yards, three of which contain the disassembly operations with a capacity to process 30,000 vehicles a year. He also owns a yard in Buffalo, NY.

“Our philosophy is if, say, our Livonia yard takes in 100 vehicles a day, we want zero left at the end of the day,” says Bassirpour, age 34, “We’re not a parts yard, just a straight recycling facility.”

Steps in the process include draining fluids and removing catalytic converters, aluminum rims and engines that ultimately get shredded separately. The remains of gutted vehicles go into a baler that compresses them into a 3-by-7 ft. (.09 x 2.1 m) metal cube. That goes to companies that shred and resell the recycled metal, often to automakers.

The cars come from various sources, including auctions, private parties and dealerships who took trade-ins that are too far gone to remarket. “Dealers don’t want jalopies on their used-car lots,” he says.

About 18 million vehicles were scrapped last year in the U.S., some 500,000 more than the number of new cars sold.

Major automakers such as General Motors and Ford tout their sustainability efforts to use recyclable materials. Metals make up about 75% of vehicles that contain up to 40,000 parts and 1,000 different materials, according to Ford.

The average age of vehicles that end up in Bassirpour’s yards is about 20 years. His firm pays roughly $170 a ton, depending on fluctuating metal prices.

“The condition of the car is irrelevant to us,” he says. “It is coming here to be destroyed.”

Some people balk at what he offers for their vehicles. “They’ll say, ‘I bought my car 10 years ago for $10,000.’ But the car is dead, the transmission shot and it won’t turn over. Psychologically, people may have a problem with what we pay, but it’s the value at that point.”

Bassirpour has been in the recycling business for 11 years, six on his own. He graduated from Michigan State University with a double major in business and communication. His wife is a doctor.

He lost money in his first two years of auto recycling. That’s changed. “It was trial and error at first, but ultimately we caught our stride.”